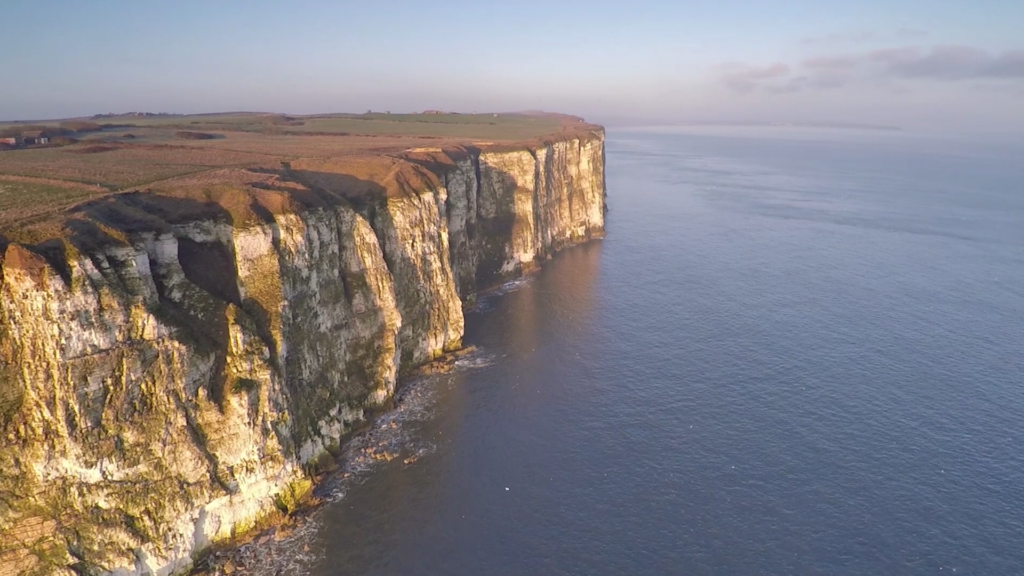 The hard chalk cliffs at Bempton rise are relatively resistant to erosion and offer lots of sheltered headlands and crevices for nesting birds.

The cliffs run about 10 km from Flamborough Head north towards Filey and are over 100 metres high at points. There are good walkways along the top of the cliffs and several well fenced and protected observation points.

Most times there will be many helpful bird watchers with a range of scopes and binoculars on hand.

Bempton Cliffs is home to the only mainland breeding colony of Gannets in England. The birds arrive at the colony from January and leave in August and September.

The Northern Gannet (Morus bassanus) is a seabird and is the largest member of the gannet family, Sulidae. It has the same colors as the Australasian Gannet and is similar in appearance. Young birds are dark brown in their first year, and gradually acquire more white in subsequent seasons until they reach maturity after five years. Adults are 81–110 cm long, weigh 2.2–3.6 kg and have a 165–180 cm wingspan.

Before fledging, the immature birds (at about 10 weeks of age) can weigh more than 4 kg. Their plumage is white with black wing tips. The bill is light bluish. The eye is light blue, and it is surrounded by bare, black skin. During breeding, the head and neck are brushed in a delicate yellow.

Numerically the most common bird at Bempton Cliffs, at around 10% of the United Kingdom population of Kittiwakes (Rissa tridactyla) live on the cliffs at Bempton.

The Black-legged Kittiwake (Rissa tridactyla) is a seabird species in the gull family Laridae. This species was first described by Linnaeus in his Systema naturae in 1758 as Larus tridactylus.

In North America, this species is known as the Black-legged Kittiwake to differentiate it from the Red-legged Kittiwake, but in Europe, where it is the only member of the genus, it is often known just as Kittiwake. The name is derived from its call, a shrill ‘kittee-wa-aaake, kitte-wa-aaake’.

It has a white head and body, grey back, grey wings tipped solid black, and have black legs and a yellow bill. Occasional individuals have pinky-grey to reddish legs, inviting confusion with Red-legged Kittiwake. In winter, this species acquires a dark grey smudge behind the eye and a grey hind-neck collar.

It is a coastal breeding bird around the north Pacific and north Atlantic oceans, found most commonly in North America and Europe. It breeds in large colonies on cliffs and is very noisy on the breeding ground.

Cliff nesting for gulls occurs only in the Rissa species, and the Kittiwake is capable of utilizing the very sheerest of vertical cliffs, as is evident in their nesting sites at Bempton Cliffs and on Staple Island in the outer Farne Islands. One to two buff spotted eggs are laid in the nest lined with moss or seaweed.

The downy young of Kittiwakes are white, since they have no need of camouflage from predators, and do not wander from the nest like Larus gulls for obvious safety reasons. At fledging, the juveniles differ from the adults in having a black ‘W’ band across the length of the wings and whiter secondary and primary feathers behind the black ‘W’, a black hind-neck collar and a black terminal band on the tail. The old fisherman’s name of “tarrock” for juvenile Kittiwakes is still occasionally used.

They are fish feeders, and are more pelagic than Larus gulls outside the breeding season.

They do not scavenge at tips like some other gull species.

The Atlantic Puffins (Fratercula arctica) at Bempton Cliffs tend to nest in rock crevices, whereas burrows are used at most UK sites. For this reason, although there are estimated to be around 6,000 birds at Bempton Cliffs, it is relatively difficult to get a close view of them. Nevertheless, there are plenty to be seen in May and June.

The Bempton Cliffs Puffins mostly fly 40 kilometres east to the Dogger Bank to feed. Their numbers may however be adversely affected by a reduction in local sand eel numbers caused by global warming, in turn caused by plankton being driven north by the 2 degree rise in local sea temperatures.

The Atlantic Puffin (Fratercula arctica) is a seabird species in the auk family. It is a pelagic bird that feeds primarily by diving for fish, but also eats other sea creatures, such as squid and crustaceans. Its most obvious characteristic during the breeding season is its brightly coloured bill.

Also known as the Common Puffin, it is the only puffin species which is found in the Atlantic Ocean.

The curious appearance of the bird, with its large colourful bill and its striking piebald plumage, has given rise to nicknames such as ‘”clown of the ocean” and “sea rooster”. The Atlantic Puffin is the provincial bird for the Canadian province of Newfoundland and Labrador.